We’ve come full circle and are starting another post with blood. I associate Hotel Chancletas with blood, not because they serve it, but because the first surfers  I saw on the first day of the first trip were dripping the red stuff out their noses. Possibly dripping blood internally too, though I didn’t hear about broken ribs until the victims returned from the doctor’s.

Hotel Chancletas is a gorgeous, smoldering beach resort with a laid-back vibe and a wave that will violently assault you any chance it gets. Why a thunderous death cylinder breaking in one foot of water is so popular is beyond me, but yeah full confession I went there too. The exposure to blood, violence, and copious hours feeling too hot to move inspired revenge fantasies. Specifically, certain individuals both public and private. Even more specifically, volcanos; being within eyeshot of a couple it was pleasant to imagine shoving a particular  doodoohead into the flames of hell… but something about that scenario didn’t feel right. And not from the moral standpoint.  Sipping a rum coconut didn’t solve this philosophical conundrum, but eating pie did.

But I had to ‘discover’ the pie. After having my clothes literally ripped off by the shore break – EVERY time I paddled out mind you – I pretended nobody saw my ta-tas and hunched over a homemade meal cooked by long time locals. Delicious! However I didn’t consider pie because it simply wasn’t on the desert menu…

…Until after I fell out of a hammock. That’s right. Everyone at Chancletas hurts themselves on the warrior wave except me who breaks skin on lounge furniture. Sober. After staunching the blood flow I was magically able to interpret the menu board, and declared empanadas to be pie – because they ARE, dammit.

Chicken, beef, and veggie curry! The Pie Eating Heathen went for beef, and I went for veggie curry. Again, and again, and traveled with a to-go empanada survival pack for the long journey home. 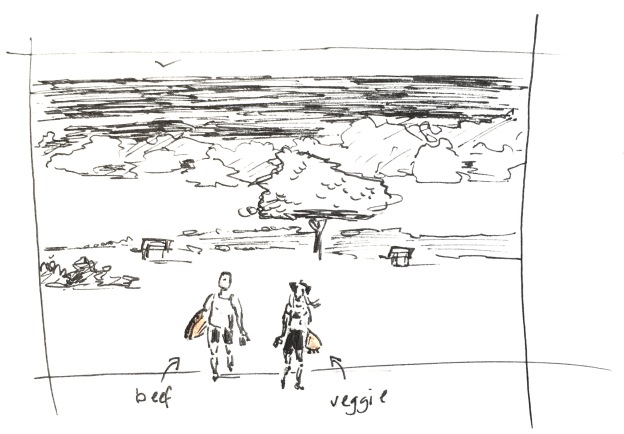 Schlepping giant empanadas instead of boards from the beach.

I’ve now been to Hotel Chancletas twice, and thanks to blood and empanadas have had three lightbulb moments. …WOO! Three thoughts in two trips, overachieving.

2) The physics of how shore break can rip off my top and untie my surf shorts is unknown to me, but fascinating.

3) And lo’ the great philosophical question was revealed  unto me in a Flavor Flash  whilst curry dotted my chin. The Truth; there are some people who you dearly wish to huck into a volcano. Don’t. Assuming said individual is abhorrent enough, the volcano will reject the sacrifice. Do not disrespect the fire gods! Gift beautiful empanadas instead.

Surfing and Strolling near Hotel Chancletas

SURFING: The Mayan Fist is straight out front. It’s located on a very long beach, so there’s a choice where you want your ass handed to you.

STROLLING: Up and down the beach, looking for a spot that won’t hand you your ass.  ( Oh but it will. ) There’s also a guided volcano hike up Cosiguina, which is AMAZING.

I was planning a pipsqueek one night road trip whose sole purpose was to scope out Astrid’s Hatchery. ( Intrigue to be explained later ). That said, there’s always time for pie,  and a quick local search pointed to Chehalis’ Market St. Bakery and Cafe.  ‘Astrid’, (busting into pedantic mode) is more or less an old Norse word meaning, ‘ divine strength’ or ‘divine beauty.’     Where did chef/owner Eric Wearner hone his skills? Iceland! What are Lisa and Eric’s kids’ names? Nina, Elsa, and Freya.

Herded by destiny, I waltzed into the spacious Market St. Bakery and stared at the display counter. PIE. Lots of it. The fun counter girl pointed out that they had whole pies but ALL of their mini pies were sold. Keep in mind this was midday on a Monday, so  how good must those mini pies be?!

I picked up a raspberry almond tartlet and snatched the very last Vinábraud – that’s a ‘Traditional Icelandic pastry with almond filling and vanilla custard ‘, to quote their online menu. Then I took some pictures and had the worst time of my life trying to draw hands, for gods’ sake. So here is the fun counter girl sporting the official Vinábraud t-shirt in holy golden light:

Then I scampered to my motel room to lord over my pastry stash like a dragon guarding its treasure. Except I’m hopeless dragon wanna-be because I ate all of it. NO REGRETS. It was YUMMY! The Vinábraud in particular would have paired spectacularly with strong coffee and a desire to pillage.

Market St. Bakery & Cafe, I will return for a second attempt at pielettes  and Vinábraud! And Hooligan, stop giving me that look I promise  I’ll pick up some of their dog treats too.

Surfing: Well, about 3 hours away there’s a place called Long Beach which states the obvious.

Strolling: I blew it! Only one afternoon and night in the area and I spent it loitering in my motel room. But what blessed loitering it was! Strolling consisted of walking from the bed to the bathroom in my mini kingdom at The Relax Inn. BONUS: The Relax Inn is a rarity; locally owned, clean, comfy, and less expensive than the big boy chain hotels/motels. Aptly named!

EXTRA SPECIAL BONUS! 15-20 minutes from Market Street Cafe and nearly shouting distance from Astrid’s Hatchery, Winlock Eggspress serves scrumptious eggy meals! I experienced a veggie/egg/hashbrown burrito, and it even freakin’ came in a to-go bag with hand drawn smily faces and, ‘ Have a great day!!’ Fan for life.

Peasant Pies are touted as meals-to-go, which is true enough, but they should also be called, ‘meals-at-speed’ because that’s how fast I ate them. Walking out with peasant pies in hand is like scoring giant cookies, and they are eaten accordingly. With three locations in San Francisco, you cannot escape the Lure of the Pies. You canNOT. I visited the storefront on Irving St., just a couple of blocks away from Golden Gate Park. My Plan A) was to take my purchases to the park for a nice picnic. This is foolishness. Those buggers disappeared before I hit the first stoplight. My next Great Plan was to bring them home to heat up. The Peasant Pies clerk knew better and asked if I wanted them warmed first. “No”, I smugly replied, ” I’ll heat them up at home.”

You know what happened. The lesson here is, always take the advice of someone wearing an apron with the words, ‘ Pies for the People’ spelled out on the front. Note to self: at least these pies taste really dandy when they’re cold.

The gurus behind this mini chain are owner/manager Ali Keshavarz and chef Gerard Buulong. their goal was handheld, affordable meals, and they nailed it. On the menu are meat and poultry, veggie, and sweet pies, as well as homemade soups and salads. They also pulled a double miracle, and made these goodies AFFORDABLE. In San Francisco!! Way to go, you guys!! Ali got his masters in organic chemistry, which I suspect has led to some awesomely creative edibles. I demolished a black bean & tofu pie, then a lentil and yam pie, both mildly spicy, delicious, and unlike anything I’ve ever had. My boyfriend nommed a chicken pot pie and a Chinese beef/hoisin sauce special of the day, both earned double thumbs up. That’s right, pies can change according to request and need so you HAVE TO KEEP COMING BACK. I know I will. I haven’t finished plowing through their menu.

I have to give a big shoutout to Ali Kesharav and chef Gerard Buulong, because in the name of stuffing more pie reviews in here I’m forging ahead in lieu of doing their really, really deserved portrait. Instead, take a look at the Peasant Pies logo up top. That is the logo that marks Peasant Pies eateries. Well, mostly. I replaced their logo boy with…*drum roll *……….

PIES OF THE WEST PRESENTS:

Our first guest is here in spirit. No really. He is, literally, a spirit. You can cue the woo-woo ghosts sounds now. Chris was one of the very first supporters of my Cuckoo comics back when I was just starting and terrified. I used to run into him at small comics conventions and he exuded faith in my comics and what I was doing when I was rightfully mortified at my efforts. Still am. Support over the years like this is priceless. And Chris went all out and lifted the hearts of MANY!

We remained Facebook buddies where he was outstanding for his smart-ass remarks. He was a rare poet, I mean, not the Oh-God-Run-Away kind but a really great poet whose stuff you actually, truly WANTED TO READ and had FEELINGS AND THOUGHTS ABOUT AFTERWARDS. Most infamously I found myself laughing out loud from something he wrote while he was stuck ( literally!) in the hospital. Wait a minute, shouldn’t this go the other way around?!? I also failed to tell him – and I’m sure he’d like to know – that up until 2 weeks ago, I only glimpsed at his moniker and literally thought he called himself ‘Chris THUNDERPANTS Lee.’ The name blended with his essence so well it was unquestionable. It never occurred to me to actually READ his entire name, oh no. Whatever name Chris chooses, he crossed planes recently and his birthday coincides with this *Pies of the West entry , so Chris, this one is just for you!

Chris loved comics and other self-proclaimed ‘dork culture’ elements, especially Doctor Who. By a pre-planned coincidence, a gigantic, fantastical video rental store ( **stop laughing they still exist ) called Le Video sits only 3 blocks from Peasant Pies. In the name of awesomeness, here we are rampaging through the BBC section of Le Video, sporting ninja one-sies and tossing pies:

Chris TheOneHundredPercent – or is it THUNDERPANTS?!! – I know you are out and about cavorting! Enjoy your wonderful adventure in the time machine, and tell us all about them when we meet up again in the Phone Booth!

* Chris’ real birthday is March 1! His birthday isn’t the date of THIS blog entry, it’s the date of this blog entry on my original Pies of the West blog. Why? Because the original blog  got falootfarranking EATEN by the Internet. Every word and picture has been transposed by laborious hand.

** OR DO THEY?! Since the original posting, Le Video has closed! Boohoo!

SURFING and STROLLING near Peasant Pies

* Due to the internet eating my original Pies of the West site, everything has been painstakingly re-entered, albeit in a different order. Despite appearances, Chris ‘Thunderpants’ Lee remains our first honored guest!