Southwest side of Hawaii

I can’t tell you how to get to Uncle Robert’s Night Market, you have to be local ,or, just end up here somehow some way. The FIRST time I came here, Robert and William and their friend Michael drove me down a dark road – no I wasn’t getting kidnapped – and that’s how I discovered the only Big Live Party I’ve Ever Felt Comfortable At And In Fact Loved. Impossible to put into words and it’ll sound stupid if I do so I won’t. Maybe this feeling has to do with the all ages all styles welcome dancing. In the event you do vector in,  bring your dancing shoes and come hungry because this scene is a smorgasbord of food vendors.

I stumbled past Cheryl amidst an eye-popping medley of other goods and food spreads. Amidst an array of sellers’ displays, there she sat, behind a simple table with a few baked items. Her straight to the point style had a homing effect on me like an unclaimed honeypot to a hungry bear.  “Banana Pie” one of her signs read. Oh my god! 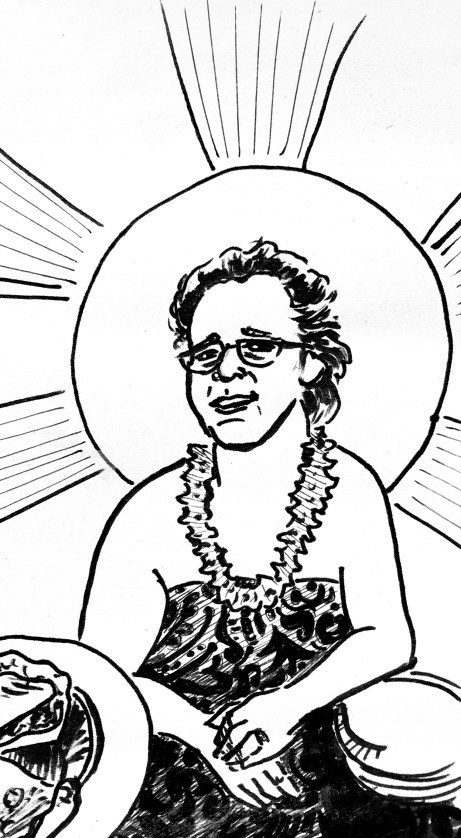 Like Prince, Cheryl needs only one name. Pie doesn’t get better than this

True story; once upon a time, a bear nocturnally broke into Yosemite’s Awanee hotel kitchen and ate 17 banana cream pies. Imagine coming into work that next morning. If you have the opportunity to buy homemade banana pie from a Hawaiian Grandma, for gods’ sake be like that bear and don’t hesitate. Cheryl did not have 17 banana pies, but she did have one and I totally fangirled this poor woman over it.  After making a fool of myself peppering her with questions, I bought a slice and then dorked away towards the band with a huge grin on my face.

Needless to say, Cheryl’s banana pie was spectacular in all ways. Also amazing were Cheryl’s hands – what is it with Hawaiian bakers? – same as Papa’a Palaoa’s crew, these were large hands meant to create great things. The best kind of hands.

Mahalo to Uncle Robert’s for existing! And to Cheryl,  for feeding this happy bear. Many blessings and dancing for you all!

BONUS: Cheryl has a fabulous face and dress and for the life of me I couldn’t capture it. Numerous attempts were made. The closest I came was the version above and this coloring-book version. I do think her banana pie is legend, so her picture is too:

Fill this in with tropical colors!

Surfing: THIS IS HAWAII.

Strolling: Just walking around Robert and William’s neighborhood gave me a thrill. All the flowers! There’s also Volcano National Park!